New Mules for the Mounted Companies 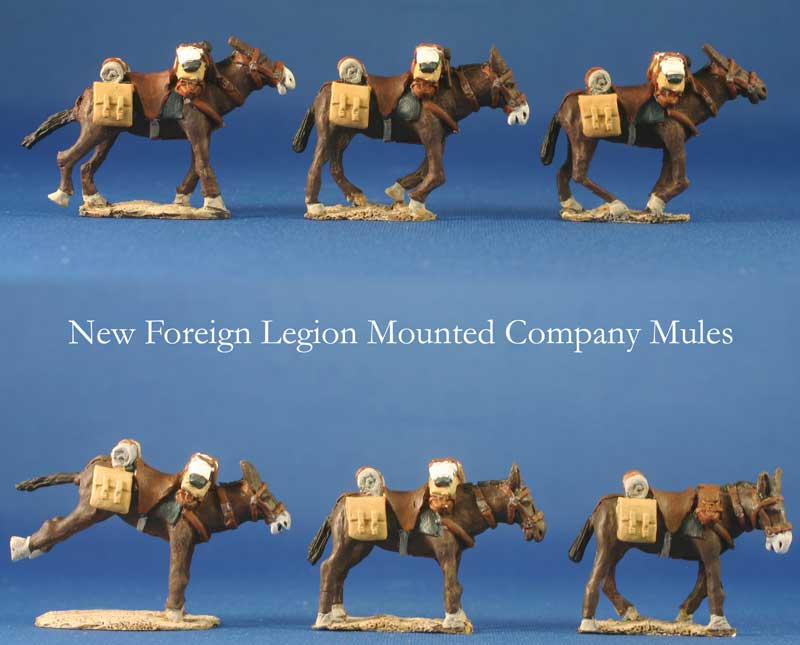 We've made new mules for the Compagnies Montee.

The Mounted Companies of the Foreign Legion have new mules.

The existing mules were just not heavily encumbered enough. I've been wanting to update them for some time and finally had the time to do so.

The Compagnies Montee of the Foreign Legion were the elite of the elite, the members specially selected for these units. According to Martin Windrow, they could maintain a pace of about 4mph from well before dawn until late afternoon, covering up to 50 miles before pitching their defended overnight camp. They could keep this up for as long as 15 days at a time, broken up by a few rest-days; with such a radius of action, and infantry rifles and training, they were far more versatile than horse cavalry, and had far greater firepower.

One Legionairre rode his mule and another marched alongside. They switched every hour. NCOs had their own mules and officers rode horses.

The mule carried its own feed and the men’s rations and kit. Our mules have the artillery saddle and bridle and blue saddle blanket. In front of the saddle (from bottom to top) are two leather wallets, a 20-kilo "sausage" oats sack, and a rolled tent with greatcoats inside. Some of the mules also have an axe. Behind the saddle is a rolled blanket and two artillery bissacs which are made of unbleached canvas.

In the top row of the photo are three variations of walking mules. In the bottom row are a kicking mule, a standing mule and an adjutant's mule.

The mules will be used in FRC-3 and -4 going forward.