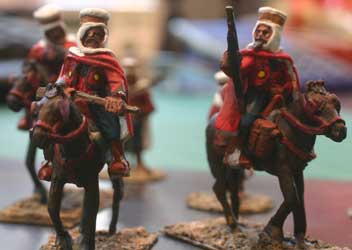 After quite a bit of development, we've released our French Spahis.

Pictured are the Spahi troopers mounted on their Berber horses and dressed as Algerian Spahis.  With the substitution of a blue burnous, they could be Moroccan Spahis.

Spahis were the native light cavalry of the French Army of Africa.  They were used as scouts, couriers, escorts, and gendarmes.  In the latter role they would be the ones to search for Legion deserters.  It was with these roles in mind that we've made the troopers in various poses with their carbines and on walking horses.

We also have command figures --the native officer is in a suitably heroic pose with a raised sword--and dismounted figures of both command and troopers .