Here's a first look at the planned release of Algerian Spahis on foot.

The Spahis wore traditional dress, so these figures are equally suitable for Algerian tribal figures.

I could have classified them as "Algerians" but have chosen to classify them as "French."  Below are a French and a native Spahi officer, which form the dismounted command.

All the figures wear the Zouave-style dress as worn by the Algerian and later the Moroccan Spahi regiments.  In addition, the mounted units wore a white burnous and Arab-style headdress.  A red (blue for Moroccans) cloak was sometimes worn over the burnous.   The period postcard below shows that the French members of the Spahis (on foot, left) wore a fez and boots. 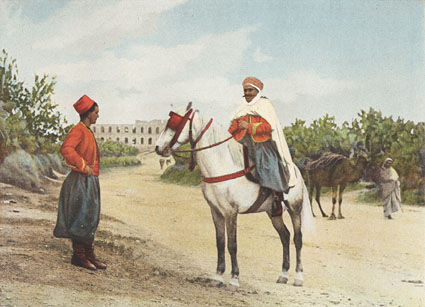