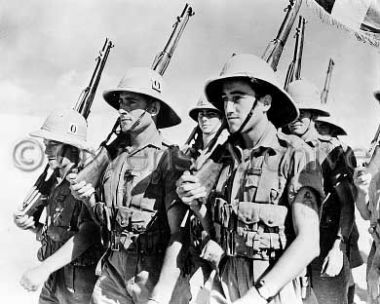 On July 12, 1940, the 3rd Battalion of the 24th Colonial Infantry Regiment (24th ICN) stationed in Cyprus refused the armistice and, led by Captain Lorotte de Banes, gathered in Nicosia where he was enthusiastically received by the British. Directed towards Egypt, these 350 French volunteers are welcomed in Ismailia by 150 comrades of the 24th RIC, commanded by Captain Folliot who escaped from Lebanon, on June 27, with his men of the 3rd Company, to the help with false mission orders [SIC].

Meeting at Camp Moascar, the French volunteers decided to take the name of 1st Battalion of Marine Infantry (1st BIM) and constitute, for the British, the first element of the Free French . On 25 August at Moascar, in the presence of the British authorities and French representatives, the Battalion solemnly received its flag accompanied by the Union Jack . The BIM soldiers obtained from the British, not without some difficulties, equipment (radio, weapons and equipment) to cope with the particular conditions of the war in the desert.

Compagnie Folliot is the first operational and, on September 6, 1940, left Ismaïlia to join, in the region of Marsa Matrouh (Egypt) the 7th British Armored Division which faced 200,000 Italians. In early December, the 2nd Company joined Compagnie Folliot at the outbreak of the British offensive. Folliot then took command of both companies. On 7 December, BIM Free Allies and Frenchmen crossed the Libyan border and seized Sollum and Sidi-Barrani, leaving several thousand prisoners. Bardia falls on January 6, 1941 and Tobruk on the 21st, causing the first losses in the ranks of BIM.

The British offensive continued in Libya in February 1941. In March, under the command of Captain Jacques Savey , the 3rd Company, 250 strong, is sent to join the Brigade d'Orient of Colonel Raoul Monclar in Eritrea where she takes part in the capture of Keren (March 27) and that of Massaoua (April 8).

In May 1941 the entire BIM, now under the command of Lieutenant-Colonel Chevigné , is found in Qastina, Palestine where the Free French Forces gather in anticipation of the Syrian campaign. On May 27, General de Gaulle reviewed the troops and handed the Cross of Liberation to several BIM soldiers. During the June 1941 campaign in Syria, the Battalion was at the forefront, particularly during the capture of Damascus. He is then incorporated into the 1st Free French Brigade of General Koenig and now comprised of two reconnaissance companies and an anti-tank company under Jacques Savey. At the end of September 1941, he joined the 8th British Army in Libya. In mid-January he took part in the capture of Halfaya before occupying with the Koenig Brigade, the position of Bir-Hakeim, south of Tobruk. After three months of organization of the defenses of Bir-Hakeim and patrols in the desert, the Italian-German offensive led by Rommel begins May 27, 1942. After a fierce resistance of 14 days, the order is given to Koenig to leave the position. During these battles, BIM suffered heavy casualties including that of its leader, Commander Savey.

After 45 days of training in Australia near Sydney and five months near Tel Aviv in Palestine, the "Pacifiens" are engaged in the campaign of Africa within the 1st Free French Brigade (BFL) of General Koenig. On December 28, 1941, the 1st complete BFL starts to Libya.

THE FIRST VOLUNTEERS OF THE PACIFIC BATTALION

BP 1's baptism of fire took place on January 15, 1942, at the Egyptian-Libyan border at Halfaya, where 6,300 Italians and Germans were holed up. The commitment is short because the enemy capitulates and goes en masse.

On February 14, 1942, the Koenig Brigade relieved a British unit at Bir-Hakeim. For three months, she arranges the position and organizes deep patrols (Jock columns) that harass the enemy by reporting information. At the dawn of May 27, 1942 the Italian division Ariete triggers the first attack. BP 1 occupies the southwest flank of the position; On June 6, he received and rejected the first major attack. Under extreme conditions, the Battalion managed to maintain its positions, but on June 9, two days before the sortie, during a general attack, it lost its leader, Lieutenant-Colonel Broche and his deputy Captain de Bricourt.

On June 10, the British command ordered the evacuation of the position. After repelling the assaults all day, the French leave the position by breaking the enemy's steel circle and manage to join the British VIII Army. The 1st Brigade held its position for 15 days and this delay imposed on the Afrika Korps allowed the English of General Montgomery to reorganize in Alexandria.

THE MARINE AND PACIFIC INFANTRY BATTALION

Strongly tested by the Battle of Bir-Hakeim, the units constituting the 1st Brigade must be regrouped. Thus, BP 1 and 1 BIM, both of which lost their commanders, merge to form the Naval and Pacific Infantry Battalion (BIMP).

The Battalion, under the command of Commander Bouillon, has a little less than 700 men and is an integral part of the 1st Free French Division. After the battle of El Alamein (Egypt), which stops the advance of the Axis forces, the BIMP is the only French unit, with a flying column of tanks and armored cars Moroccan spahis, to be detached from the 8th British Army to take part in the offensive pursuit of the enemy which begins as early as November 5, 1942.

In the wake of the British, the BIMP enters Tunisia on February 23, 1943. Rommel counter-attack but it fails. From March 14 to May 5, the BIMP is the only unit of the 1 st DFL to operate in Tunisia with the troops of the Force The General Leclerc. May 13, 1943, finally, is the general surrender of the forces of the axis. The division counts its prisoners: 1,200 officers and 23,000 men.

After the campaign in Tunisia, the BIMP is reinforced by the arrival of volunteers from North Africa, escaped from France by Spain and Corsicans. Begins a period of reorganization and intensive training. The BIMP was incorporated in October 1943 into the 4th Brigade of the 1st DFL of General Brosset.

On April 20, 1944, with the DFL, the BIMP landed in Italy. The general offensive is unleashed on the evening of 11 May. During the fighting in front of San Giorgio on May 16th, the Battalion lost its leader, Battalion Commander Magny , who fell at the head of the 3rd Company. The DFL goes back to the attack and achieves its goals. The Girofano is circled and the Gustav line is broken. On June 4, the suburbs of Rome are hit, a BIMP company makes its entrance and runs alone. On June 30, 1944 in Naples, General de Gaulle reviews the 1st DFL. The BIMP is quoted to the order of the army and its pennant receives the cross of war.

On the night of August 16 to 17, 1944, the BIMP landed in Provence and distinguished itself in the 20 before Hyères by removing the Golf Hotel, converted into a fortress by the Germans. He then participated in the cleaning of the forts of East Toulon, the rise of the Rhone Valley and the fighting of the Vosges.

But the overseas troops, African skirmishers and volunteers of the Pacific badly supporting the cold, the high command decides to carry out a general relief which concerns some 6 300 men, including 275 Caledonians and Tahitians of the BIMP. These survivors of the 1941 Pacific Battalion were replaced by young metropolitan recruits and FFIs. The "Pacifiens" are then directed to Paris pending their repatriation.

Then, the BIMP book throughout the month of November, hard fighting on the foothills of the Vosges, to open the road to Lower Alsace. On December 4th, 1944, the Battalion, resting with its division in the region of Vesoul, leaves the front of the Vosges for the region of Bordeaux, where the 1st DFL regroups for a action of strength against the pockets of the Atlantic.

But a few days later, the German attack led by von Rundstedt in the Belgian Ardennes forces the Division to return quickly to Alsace to defend Strasbourg. The enemy attacks January 7, 1945. Polar temperatures, the BIMP, which holds Rossfeld and Herbsheim, suffered violent assaults, but managed to maintain its positions, despite the precariousness of its links with the rear. Exhausted by these hard fights, the BIMP is relieved by the 1st Battalion of Foreign Legion, and placed in reserve. In spite of its wear, consequences of the combats of the beginning of January, the BIMP is entrusted a defensive sector during the attack against the pocket of Colmar with which the other units of the Division participate until March 7, 1945.

The BIMP stands guard at the Rhine before moving with the 1st DFL for the front of the Alps, where the latter takes a stand against the massif of Authion. On 9 April 1945, in Nice, General de Gaulle handed the Cross of Liberation to the BIMP, pinning the decoration on the cap of Corporal P ecro , taking the place of the pennant. The next day, the BIMP leads the frontal attack of the Authion massif. At the cost of heavy losses, he struggles for four days to snatch the last German locks. This is the last action of the BIMP before the Armistice of May 8, 1945.

Today, the 3rd Naval Infantry Regiment based in Vannes is the inheritor of the BIMP traditions.

The 1st BIM, the BP1 and the BIMP counted in their ranks 72 companions of the Liberation

NOTE: I have mostly left the article written in the current tense of the original and the masculine and feminine definite articles. It should not hinder understanding.