A new French 75 for the Foreign Legion 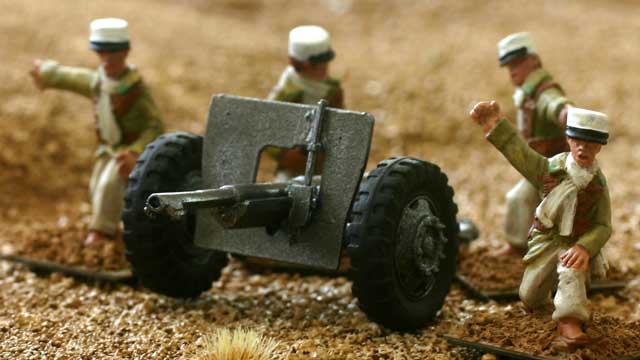 We've been working on a new version of the French 75--this one for North Africa.

Here are a couple of pictures of the as yet unreleased version of the French 75 in an anti-tank role with the Foreign Legion in North Africa.

In 1940 and 41 two Batteries Saharienne Portee  (BSPL) were formed at Ouargla Algeria and Ft. Flatters. Our FR-14 Legionnaires are these troops. Both batteries fought with the Allies in Tunisia in the winter of 1942-43.

In January 1941 the 6th REI formed a Groupe Autonome d'Artillerie du Levant, with three four-gun batteries. They fought against the Allies in June 1941. The 13th DBLE took over four of their guns and used them against enemy armor at Bir Hakeim, transporting them en portee on Ford 3-ton trucks.

Our new 75 will have pneumatic tires and features an entirely new carriage, gun and shield as well.

I haven't found a color scheme for these guns, so I've just painted them in gun metal for now.