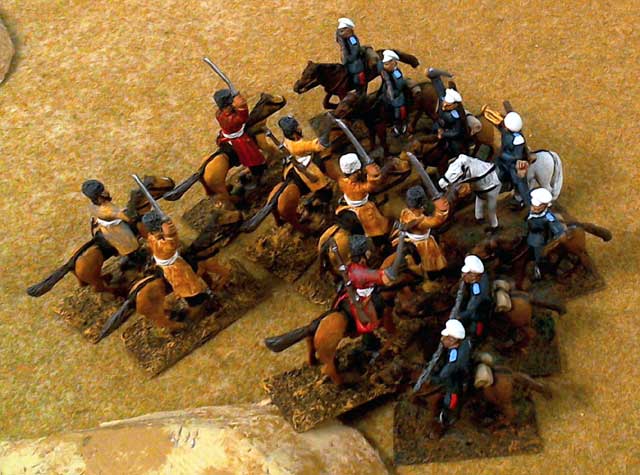 The scenario had the Russians needing to clear the way to the Hill Fort so they could begin siege operations. Before they could get there, they had to clear defenders from the far side of a wadi, dislodging the defenders.

The rules were Colonial Adventures by Two Hour Wargames. 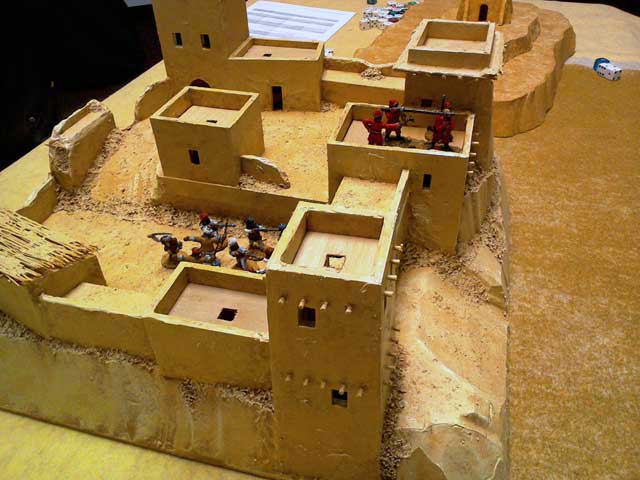 Above, the Hill Fort. The defenders were a mixed force of Bokharans, Turcomen, Pathans and even Turks. The Turks manned a Krupp 75mm gun and one of the newly-released Turkish Gatling crews manned a Gatling gun. OK, I'll admit it: it was a good excuse to use the Gatling gun. The Bokharan army at this time did have some fairly modern artillery so giving them a gun was not out of the question. Following the fall of the Soviet Union in 1991, Turkey did reach out to help their fellow ethnic Turks so it is not beyond the realm of possibility to suggest that they might have done so a hundred or so years earlier, too. 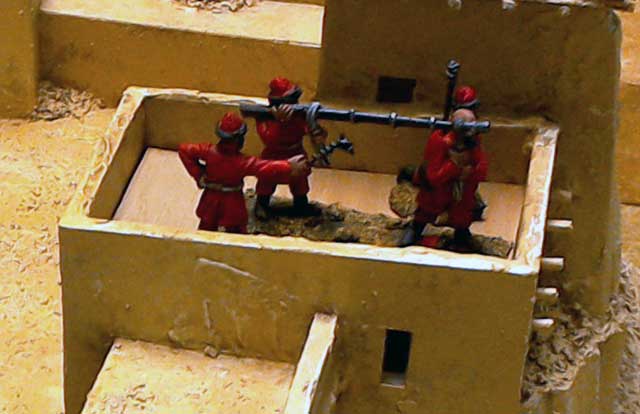 A jingal crew defended the fort. The Bokharans used an older style matchlock gun. Unfortunately, the Russians never got close enough for the gun to be used.

The units were set up as 10-figure groups, both infantry and cavalry. Most of the Bokharan side were rated as REP 4, except for the Turkish artillery crews and the Pathan melee unit. The Russian infantry were REP 4 as well, with the Cossacks and the Sailor unit being 5. Both sides had a REP 5 General.

For some reason not clear in hindsight, the Russian guns were rated REP 3. Maybe it was because I hadn't painted the guns and hadn't assembled limbers for them. (I've fixed that since!) The low rating hampered the guns' movement, but they had ample range to hit the far side of the wadi. 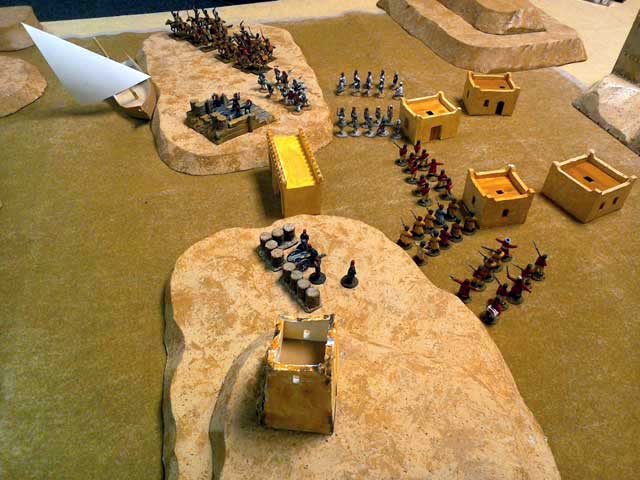 The Bokharan opening position was strong defensively. There was a sort of ancient gate over the road, which runs left to right horizontally in the photo. The Turkish Krupp gun is to the Bokharan right, the Gatling to the left. Strong forces wait behind the gate. Note also a derelict boa in the wadi, which runs top to bottom along the line of the hills. The Turcomen cavalry are massed behind it. 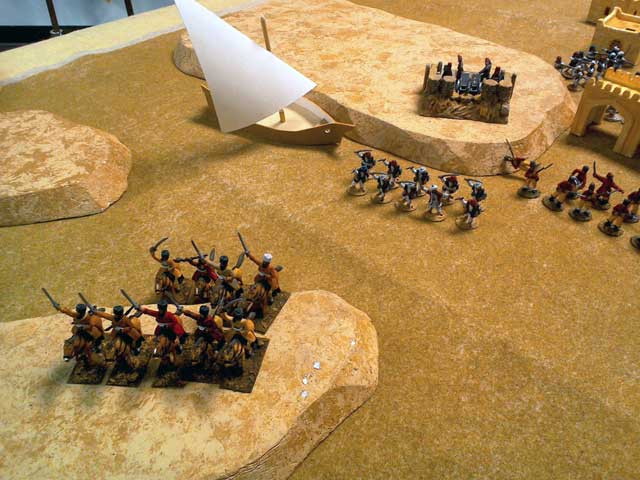 The Bokharans moved out aggressively. The Turcomen cavalry can be seen advancing followed by the Pathan melee unit and a Bohkaran infantry unit.

Why not? The Central Asians are armed with musket with a range of 20" while the Russian Krnk rifles have 24". The Russians can do two actions per turn; the Asians one. Despite the Russian fixed bayonets, the Asians are better off closing if they can. 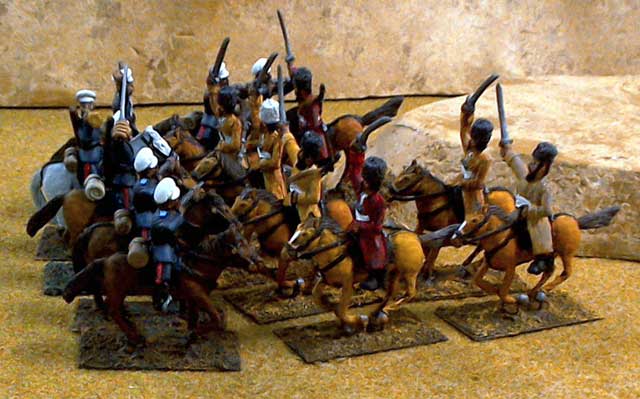 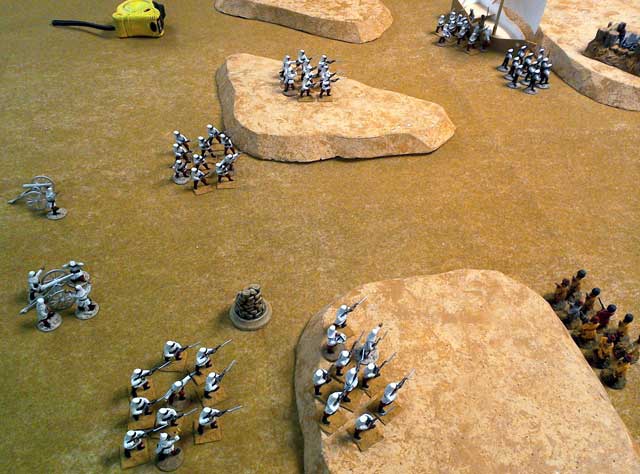 The second unit of Turcomen cavalry came to grief attacking the Russian infantry, as did the Pathan melee unit. Neither unit caused much damage. At the top of the above photo, you can see a unit of Russian infantry engaging the remainder of the Pathans, who have sought cover in the old boat. The Bokharan commander engaged the Russian artillery in counter-battery fire, eventually wearing down one gun to one figure (center left). Artillery is usually more effective against formed infantry, but gamers invariably go for the guns. The Sailors are going to engage the Turkish Krupp battery (upper right) while the two Russian infantry units in the lower foreground are advancing on a Turcoman foot unit. There's also a foot Cossack unit off the bottom of the photo. 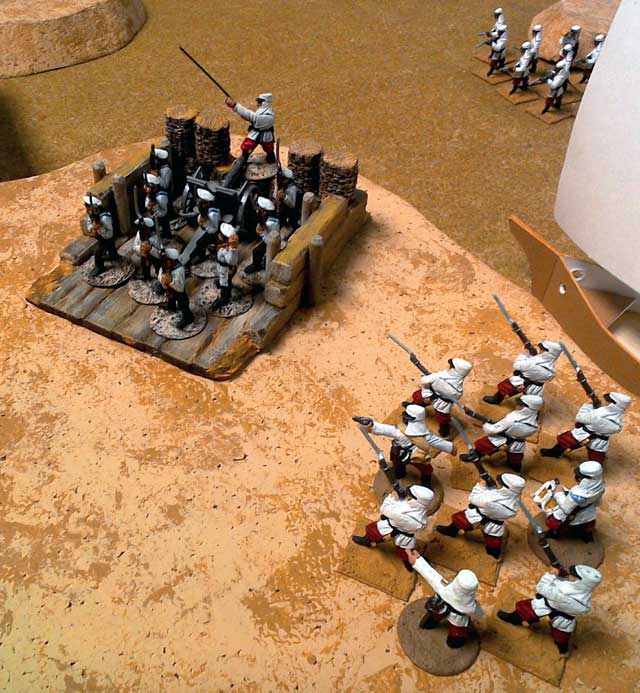 After a fierce struggle, the Sailors have taken the redoubt! A Russian standard bearer (sans flag--I'm fixing that, too) stands on the wall to signal the victory. The infantry unit to the right has the Russian general attached to give it the REP 5 bonus. 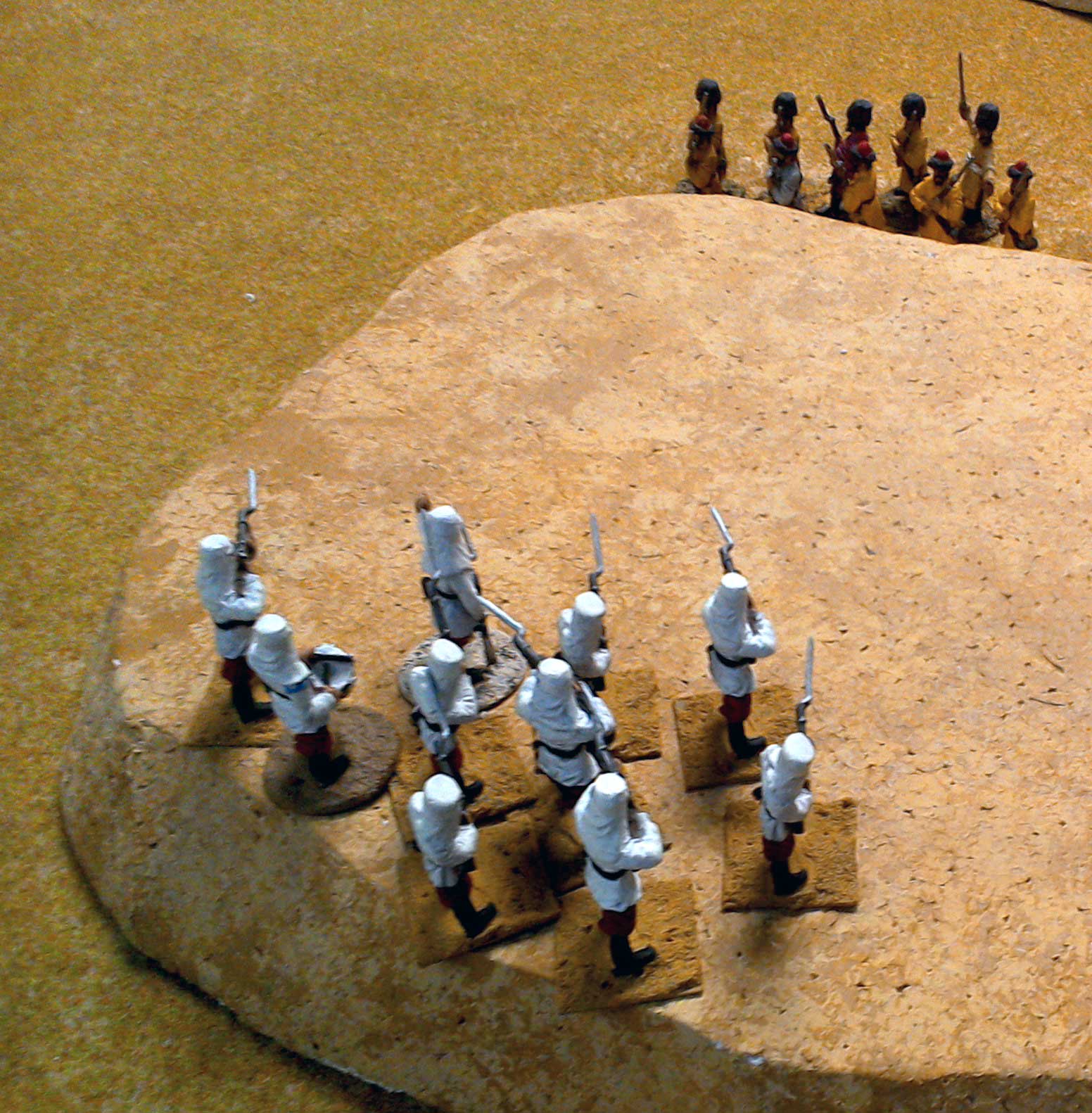 On the Russian right, the advance has been slowed by the Turcomen in the wadi and the Gatling gun firing over them. 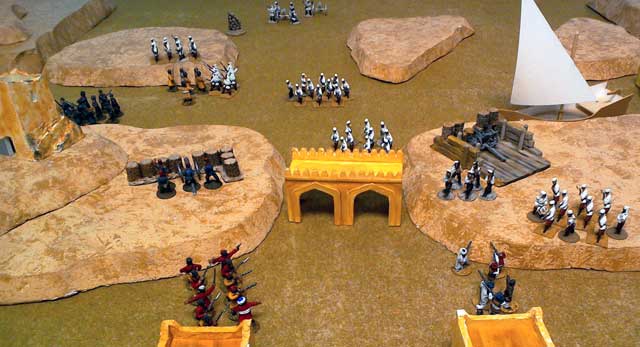 The final positions. We called the game at about 3 1/2 hours. On the Bokharan right, the Pathan rifles are facing the remnants of the Sailors and a Russian infantry unit. On the upper left, two Russian units have converged on the Turcomen--try will rout. The foot Cossacks are advancing on the unmanned ruined tower, unopposed. The Bokharans have only one unit unengaged (behind the Gatling gun) and another in the fort. Time for them to retreat into the fort--if they can.